Who can become a student of EBS?

Indeed, not everyone with sufficient financing. Madis Habakuk has established specific criteria for EBS applicants.

“First of all, he or she must have the will to achieve and the desire to advance in life. Secondly, such people often have a strong motivation to develop themselves. We expect them to be creative and entrepreneurial. Thirdly, they shouldn’t have any weaknesses. A person with an obvious weakness cannot function as a leader,” Habakuk explained in the 2005 EBS booklet introducing the lecturers.

A majority of EBS students met the criteria established by the founder of the school. It has even been proven scientifically! Between 1995 and 1997, Ruth Alas, a long-term lecturer with EBS, who has also served as head of the management department and Prorector of Research, asked EBS students to fill out psychological tests. The results of these tests were compared with the corresponding indicators of the students of economy in other universities.

EBS students are enterprising even when organizing university events: the ball is one of the oldest traditions organised by students themselves. Pictured is the 1995 EBS Ball held at the House of the Blackheads. 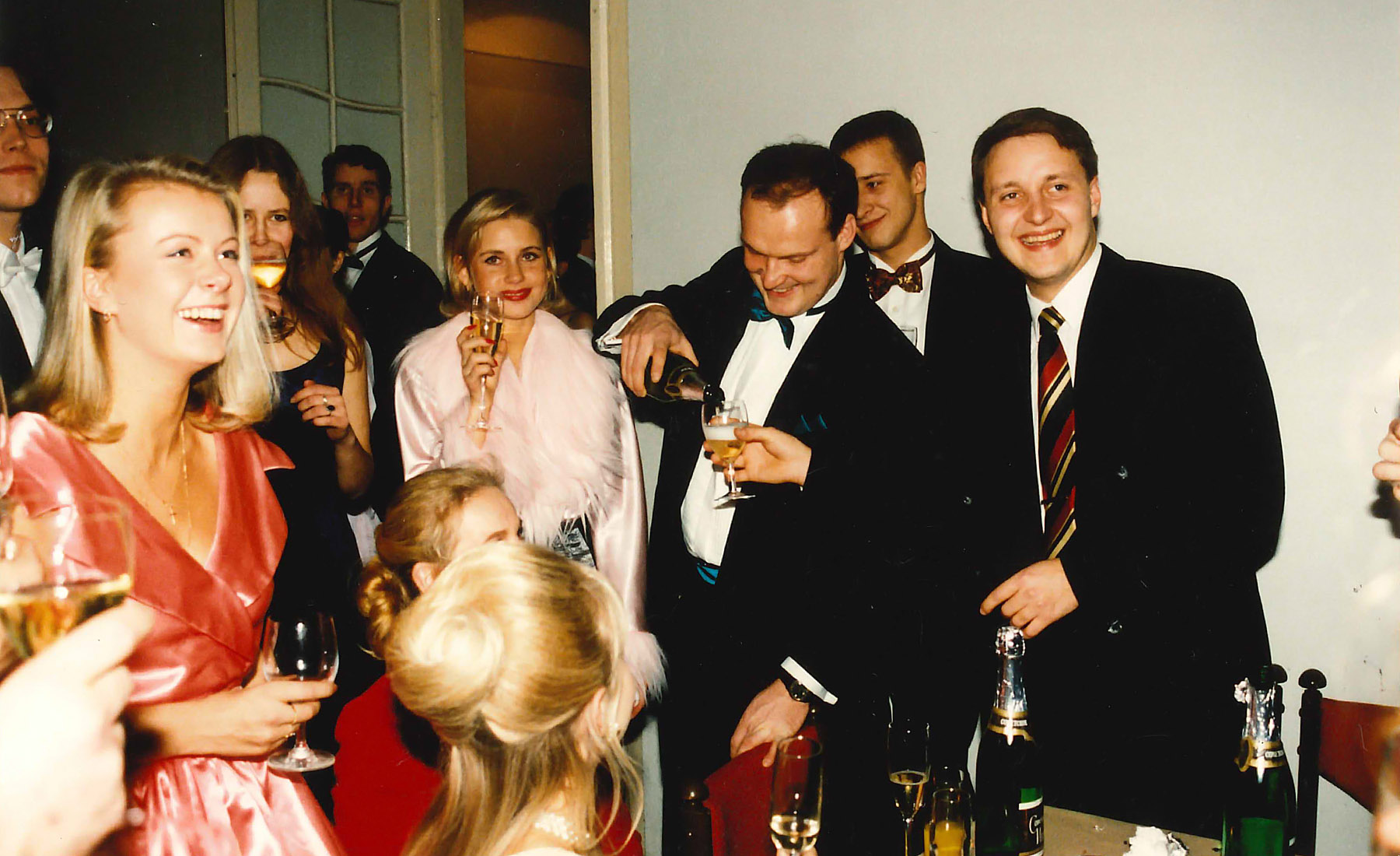 “The results revealed that EBS students are more extrovert – more energetic, more entrepreneurial and with a better stress tolerance than students of other universities. As I had previously worked with human resources for 10 years – first with the creation of the young leaders’ reserve for the republic and then with the recruitment of Estonian representatives for foreign companies – we asked all of them to fill out a personality test, as well. Above all, we were seeking extroverts. To sum up, I discovered that EBS has admitted just the right type of people – we are preparing those equipped to become successful in the field,” said Ruth Alas.

The first school to teach the principles of market economy

“I started out with the first bachelor’s graduates of EBS in 1991. My professional career started in 1992. My first serious job position came at the beginning of 1993, when Hardo Pajula invited me to Hansapank. I served with the marketing department for the next three years.

For me, the foreign lecturers of EBS helped to shape my beliefs and visions. We were the first flight and things could easily have gone awry. Therefore, the management made a special effort to provide us with a very good curriculum and excellent lecturers. Foreign lecturers made up a majority. They were a great help for me in figuring things out. No other university beside EBS provided a market economy-based education at the time. EBS was the first one.

When I entered the labour market in 1992, it was a time when companies re-orientated to open market economy. There was a desperate need for specialists, albeit young and green. I believe our education helped a lot in the first few years. Most certainly, EBS was useful. The knowledge obtained is one thing. But I would not underestimate the influence of my course mates, with whom we went through hell and high water, quite literally. The contacts made have also proved beneficial, professionally.”

As stated above, Madis Habakuk considers creativeness and entrepreneurial mindset to be the important characteristics of an EBS student.

EBS graduate Sirli Kalep recalls a story from her bachelor’s period, suggesting that the students were truly creative and entrepreneurial – and not only in class. “We were hanging out in the city with EBS students and felt that we neither wanted to party nor go home. We decided to go to school but were faced with the problem of getting inside the building late at night. We rang the bell and told the security guard we needed to access the student representation room for a conference call with a US university. The security guard placed a phone call to Kristiina Kägu, chairman of the student representation. Kristiina realised what was going on, and replied that, indeed, a conference call had been scheduled and the students must be allowed in. That is how we got to spend a few more hours in EBS.”

The first risk-takers or the launch of daytime studies

“The first day-time study programme was launched in 1991, with more than sixty students. Two groups of bachelor’s students started out in the Sakala Centre. The groups also had supervisors: Hardo Pajula and Kalle Norberg.

What was EBS like at the time? Above all, we had two lecture halls, an office and a cafeteria in the new Sakala building. I remember lecturers Hardo Pajula, Marc Hyman, Jeff Mecom, Peter Alapin and Henn Käärik as the most fascinating characters. Language teachers Aet Toots and Jaanika Sarv, as well.

The cafeteria was the centre of student life (and for some, the smoking room). The cafeteria was open from nine to five. In the first year, we were not “bothered” by younger students. This was the venue for all beginning events. Starting from birthdays, paintball, Rodar Act and ending with graduation celebrations. It was also the beginning of drinks, jokes, sports and love (probably a marriage and children for some). We even composed a school anthem at the time, but have unfortunately lost the lyrics and melody.

What does EBS signify for the graduates? EBS for us signifies people – above all, friends and student-time memories (not all of them necessarily positive). And we have many of those. The first flight always fails, to some extent, though.”