Student companies – the sandbox of entrepreneurship

Starting in 2000, bachelor’s study presented the opportunity to students to give the life of an entrepreneur a try – with the creation of student companies serving as the starting point.

Namely, we added the subject of “Business Foundations” to the curriculum for freshmen students. This meant that during the semester, students had to come up with a business idea, study the market and competition, prepare a business plan and create a company. In turn, EBS injected start-up capital into those companies in which the players and the school both had the greatest faith.

Ülle Pihlak, “Business Foundations” instructor and the Director of the EBS Entrepreneurship Centre, doesn’t remember there being any particular difficulties in the student companies obtaining momentum, despite the fact that some students were critical or that she also felt a number of things could have been done better. “Perhaps the expectations were unrealistically high. We were expecting the Estonian Nokia,” says Ülle Pihlak, while thinking about the beginning years.

Ülle Pihlak, “Business Basics” instructor and Director of the Entrepreneurship Centre at EBS.

Bureaucracy stole the desire for business

When the first year of running student companies was behind them, International Business Administration student Jaak Roosaare took the opportunity to express his scepticism in the columns of the Tudengileht. “Last year, the start by student undertakings was quite reserved. The project was a new one for the school and in the opinion of students the idea wasn’t quite ready yet. The biggest problem turned out to be the bureaucracy surrounding the founding of companies and the excessive paperwork, which robbed many students of their desire to run a business. There were also significant obstacles in obtaining start-up capital. Things could have been much better that year: the school had experience, companies were registered and the majority had circulating capital at their disposal. Even so, it turned out that the situation had instead gotten worse”.

Roosaare’s criticism was not unfounded, since only one of the six student companies founded at the start of the year had launched by the spring. The reason was mainly the inaction of students (for example, the company that had begun dealing with the selling of CDs had made only two(!)sales offers), as well as competition on the so-called actual market.

The situation wasn’t much better two years earlier. In February 2002, Ülle Pihlak wrote in the EBS Õppejõudude Infoleht: “Today, the first two classes have been active for a year. Sadly, it must be admitted that the Estonian Nokia and large profits have yet to be discovered. However, the student companies have fulfilled their educational goals – all of the students who participated in business activities found that they have learned a lot from actual entrepreneurship and have obtained their first experience in the world of business.

When it comes to accepting further instruction, they are now much more aware and the entire learning process has become much more meaningful for students. The request to all instructors also comes from the latter. If you are planning to include examples, group works, seminar topics in your lectures, then you could also use those instances that are real and particularly close to the hearts of students – their student companies.

I also believe that you might also be interested in hearing about what students are engaging in with their business activities, how they are doing and what problems they are experiencing. Up to this point, I have felt quite alone in the field, since even the Head of the Department of Entrepreneurship has yet to find the time to express any interest in the student companies. It is, after all, a subject of study!”

Ülle Pihlak acted as go-between for readers when it came to the most common problems that the student companies were encountering.

They don’t know how to work as a group – frequently there is a small group within a company that takes care of things and simply ignores the other members. The result is disputes that paralyse the activity of the entire company.

Overly optimistic when assessing market-research results: 100% they only see what they want to see there, and not what is actually there. Later, when the “client hesitates,” it is discovered that the action should have been foreseen.

They don’t know how to sell – what is amazing is how modest our otherwise boisterous students become when they have to sell something. The list could continue…

Even so, Ülle Pihlak didn’t throw in the towel and did the right thing. The changes that were made in establishing and running student companies were correct. Firstly time: it was evident that one semester was not enough time for a company to gain momentum. Therefore, the period of time allotted to student companies was extended to two semesters and students were also able to use the summer break in between the semesters.

The next problem was the inclusion of start-up capital: at first, EBS contributed start-up capital to the company that won the student company competition, on the condition that Ülle Pihlak was named a member of the management board. Starting in 2011, when the company was able to start without a share capital contribution, EBS gave the competition winners EUR 2000 of start-up money, they were no longer a shareholder and Ülle Pihlak was no longer required to be a member of the management board of student companies.

Pihlak, who had been the driving force behind the creation of student companies for 18 years, notes that the difficulties encountered by student companies in 2000 were entirely natural and also apply to student companies today. The changes in bureaucracy have reduced the number of difficulties. “Previously, we had to visit a notary; starting a company took time. Now you can do it in 10 minutes. This has created a new problem – students tend to found companies too easily, when they are actually not ready to do so. A lot of explaining has to be done, so that they don’t join management boards by the dozen,” notes Ülle Pihlak.

Over a period of 18 years, EBS has given birth to 220 student enterprises, the specialisation of which has extended from very simple businesses to complex and capital-intensive undertakings. Student companies have included food champions, entertainment service providers, manufacturers of children’s goods, providers of fashion and beauty products as well as a manufacturer of electronic designs. Name any area of activity, and you can be pretty sure that some of our EBS student companies have gotten their feet wet in that field.

The cooperation between EBS and Tallinn Science Park Tehnopol is of help to students who are looking to try their hand in the field of technology. In 2010 EBS and Tehnopol concluded a cooperation agreement, in order to offer students better opportunities to realise successful business ideas, utilising the technology-related knowledge of Tehnopol to do so.

Ülle Pihlak: “Estonia’s Nokia lies in the heads of students! Having worked for years with student companies, I see an ever-increasing interest in developing innovative products. Open thinking is natural for young entrepreneurs and I am sure that sooner or later a business idea will emerge from there, of which Estonia may be proud”.

Now they manufacture 3D scanners, which are sold in Europe and the United States. The ability to create a 3D print from the ultrasound image of an unborn child, allowing the parents to “see” the child before it is even born, received a lot of attention in the international media. In 2018 the company created a smartphone application which creates 3D avatars of people, allowing them to enter the virtual world.

Check out how to make a 3D model of your face with your smartphone!

“The goal of student companies has never been the continued functioning of all teams. The goal is to learn business processes, making mistakes during the learning process and learning from those mistakes. It would be incredibly utopian to expect that a team that was put together at random during their freshman year would remain together with an idea generated over a period of only one week. Ideas change, teams change. What’s more important is that your mistakes are made, you learn from those mistakes and you gain momentum, to deal with business and look for work. Student companies are the sandbox of entrepreneurship”!

If you would like to establish your own company, then always trust your gut. If you believe in something, then start doing it right away. For example, start writing a business plan.

This may seem like a total waste of time, but it is incredibly important and paints a picture of whether and when your idea will begin to pay off and will get you thinking about the small things, which you might not have analysed with all of the excitement over your idea.

Anett Kulbin, one of the founders of the student company Nobenaps OÜ, producer of flavoured vodkas 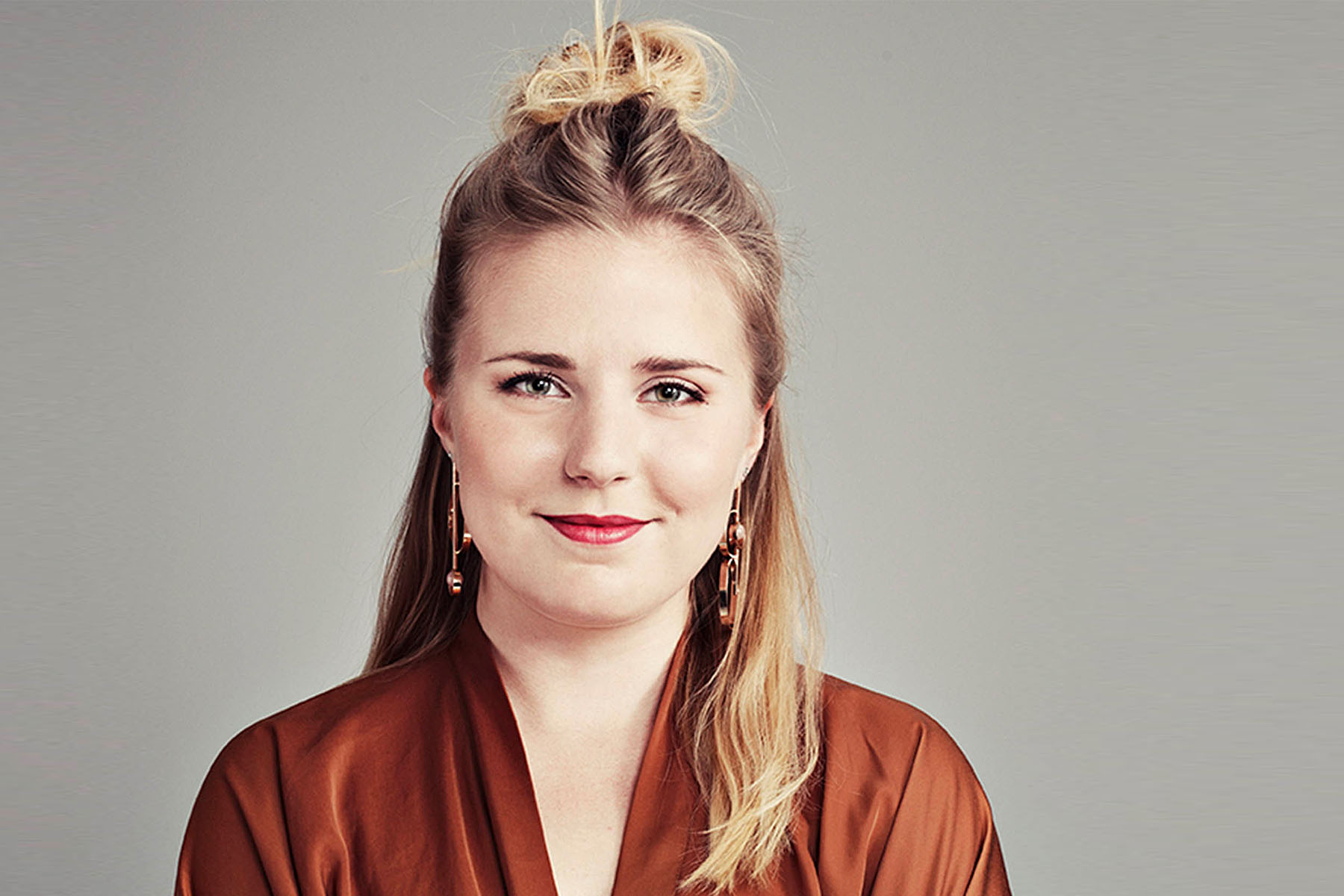 Around one-tenth of student companies continue operating after graduation.