One of the oldest surviving EBS traditions was started by the first flight of the daytime bachelor’s students.

The students started organising magnificent balls, the first of which was held in 1992 in the House of the Blackheads and was a true success. Marje Habakuk recalls that the balls organised by EBS were worthy of their name, despite the economic situation at the beginning of 1990s. “All girls were dressed in long gowns, which was not that common at the time. All students were previously instructed in good manners.”

Mart, Madis, and Marje Habakuk at the 1995 EBS Ball at the House of the Blackheads. 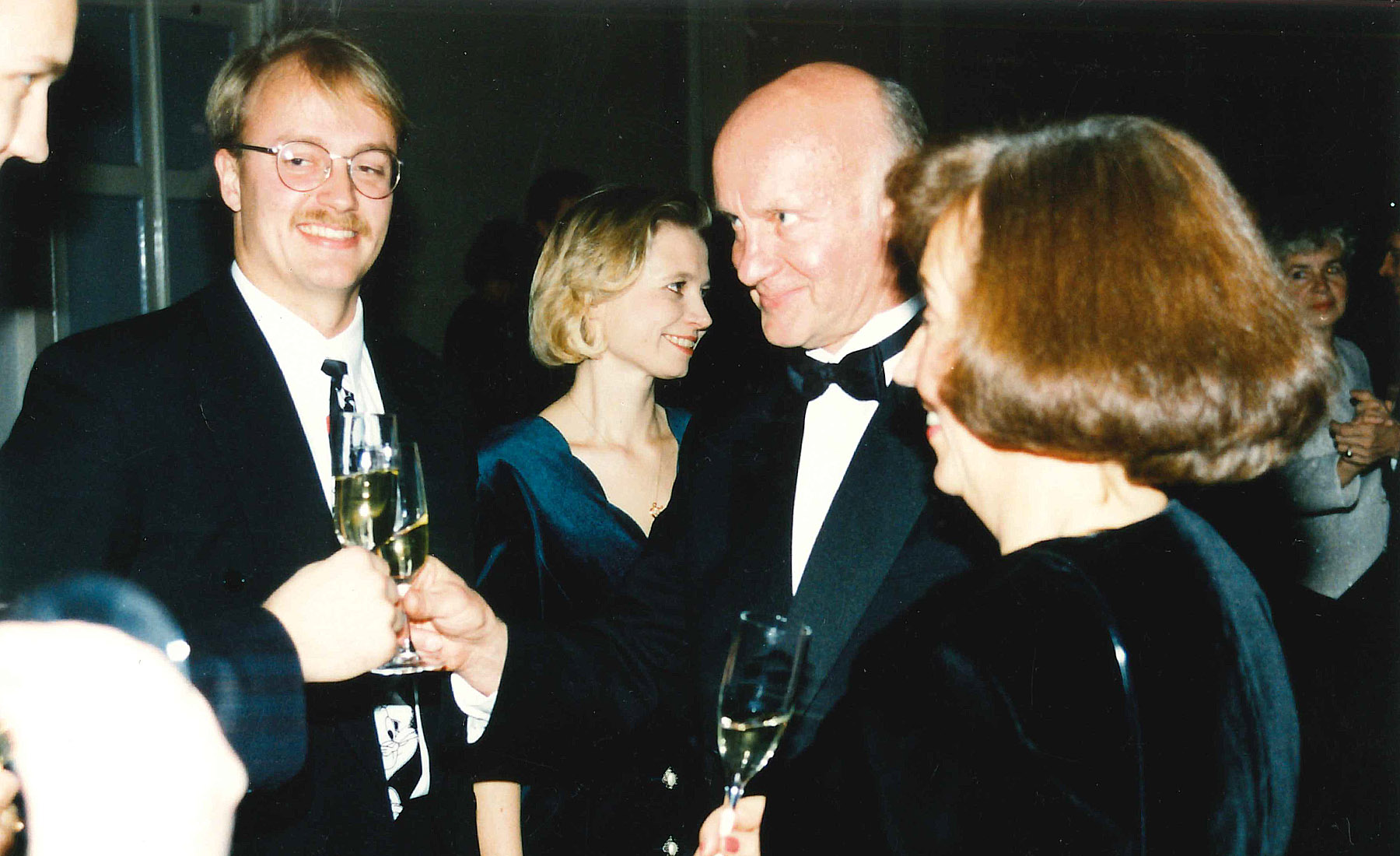 In the 1990s, the main hall of Sakala Centre was the venue of the December balls, held to celebrate the EBS anniversary. At the turn of the millennia, the tradition somewhat waned. In 2002, participants were few, and dance music failed to engage.

The team of organisers made a special effort the next year. In 2003, Christmas and jubilee guests were invited to the Estonia Concert Hall – a place where no ball of EBS had ever taken place. The party was a true success and the reputable ball tradition survived.

Graduates’ procession from the schoolhouse on Lauteri Street to Estonia Concert Hall. 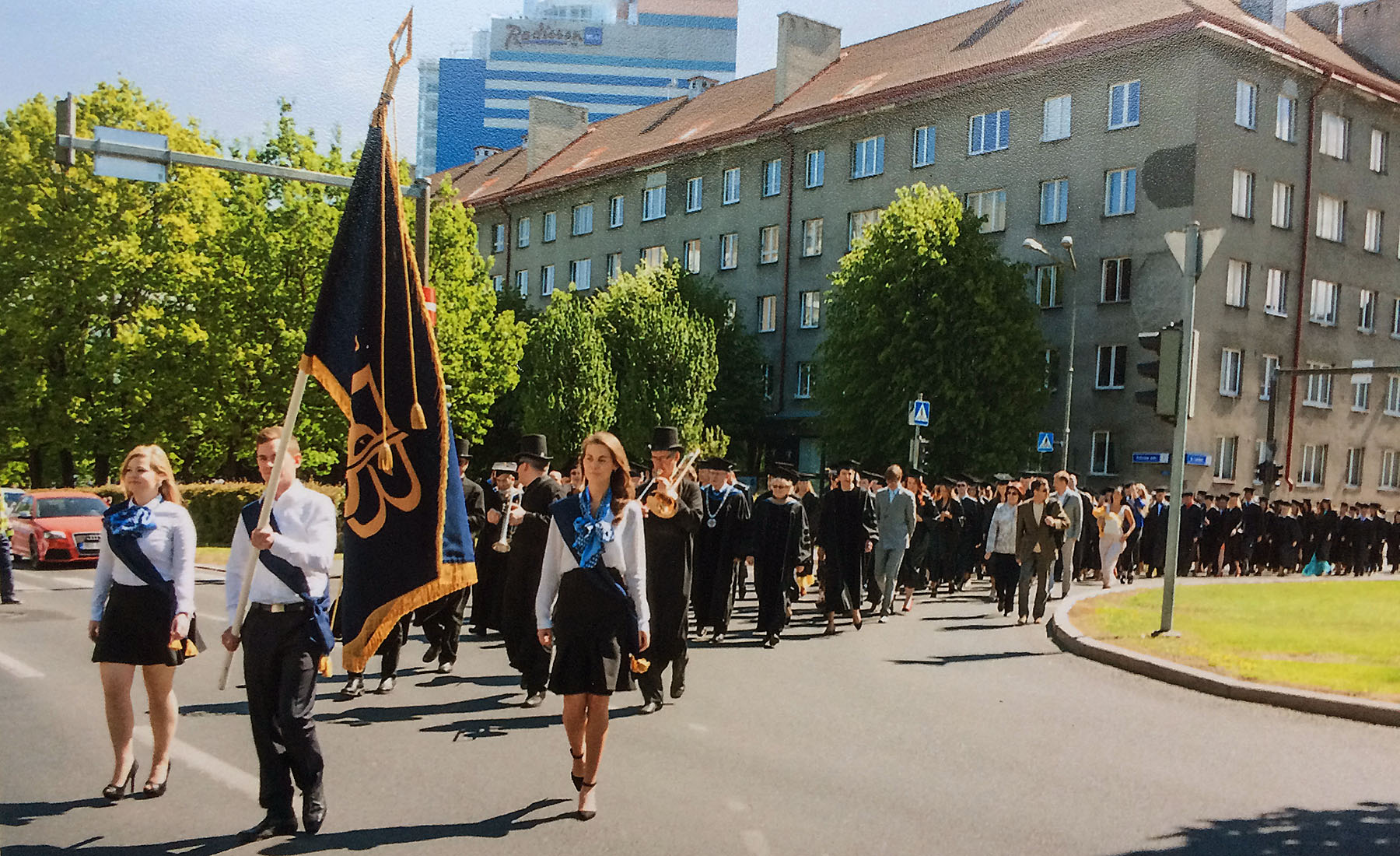 “It is a wonderful tradition”, says Sirli Kalep, three-time graduate of EBS, holding a gymnasium certificate as well as a bachelor’s and master’s diploma. The black gown, popularised by US movies, is a rental, but the students get to keep the square cap.

Sirli Kalep recalls the magnificent, proud feeling, when walking towards the Estonia Concert Hall with the entire school family, accompanied by drumbeats. Sirli advises all those who receive their diplomas in winter to pursue a further degree to graduate in spring and take part in the procession.

Another decades-long tradition is the summer days held for both students and staff members. The first summer days were held in Kurtna, Ida-Viru County, from June 28 to June 30, 1996. Nearly 150 EBS students and management representatives participated.

The dance party on the first evening was followed by a night in tent, and a morning line-up, with Madis Habakuk giving the opening speech. The student newsletter later observed that Habakuk had emphasised the importance of resting in everyday business life, and its positive impact on lifespan.

The summer days accommodated sports competitions, amateur performances and a dance party in the evening and at night. “There was no mentionable destruction or victims, other than a person falling off a swing, a few broken trees and a headache,” the student newsletter summed up.

The 3rd summer days of EBS were held in Valkla from July 3 to July 5, 1998. Nearly 300 people came to the opening, with more and more guests arriving throughout the day. The participant record was broken! 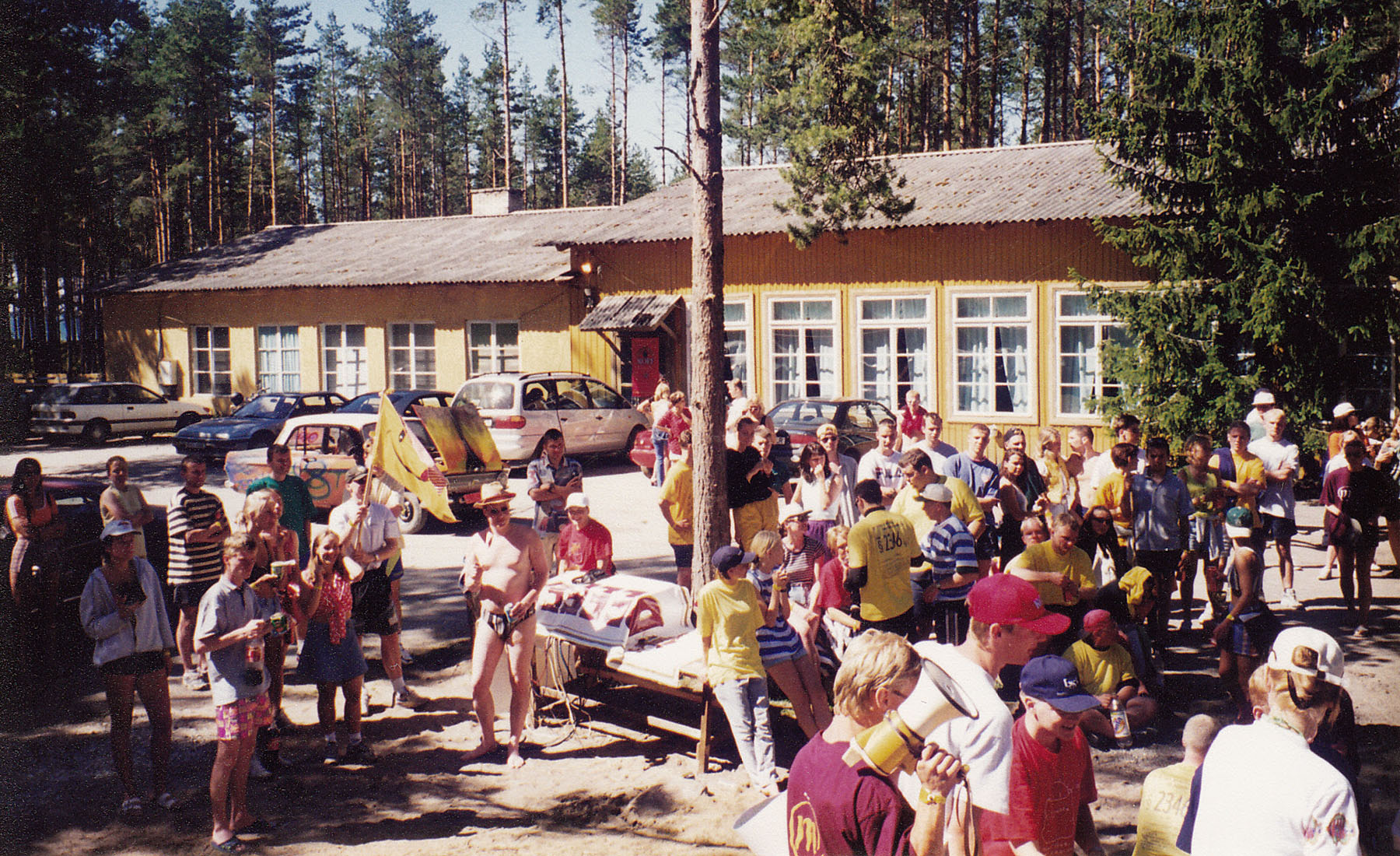 The next summer days were held in Kukulinn, by Lake Saadjärv, from June 26 to June 28, 1997. According to the student newsletter published in October the same year, the organisers were initially quite worried – only a few days before the event, a mere 90 tickets had been purchased in advance. This was far from sufficient. The Friday afternoon erased any previous doubt: The road was jammed with cars heading towards Kukulinn.

Jaana Liigand-Juhkam, who came to study international business administration in EBS in 1996, recalls that the summer days were a major event for EBS students. “We had 300 people, and the most popular bands,” says Jaana.

EBS chancellor Mart Habakuk and EBS mascot The King of Business in the student summer games of 2018. 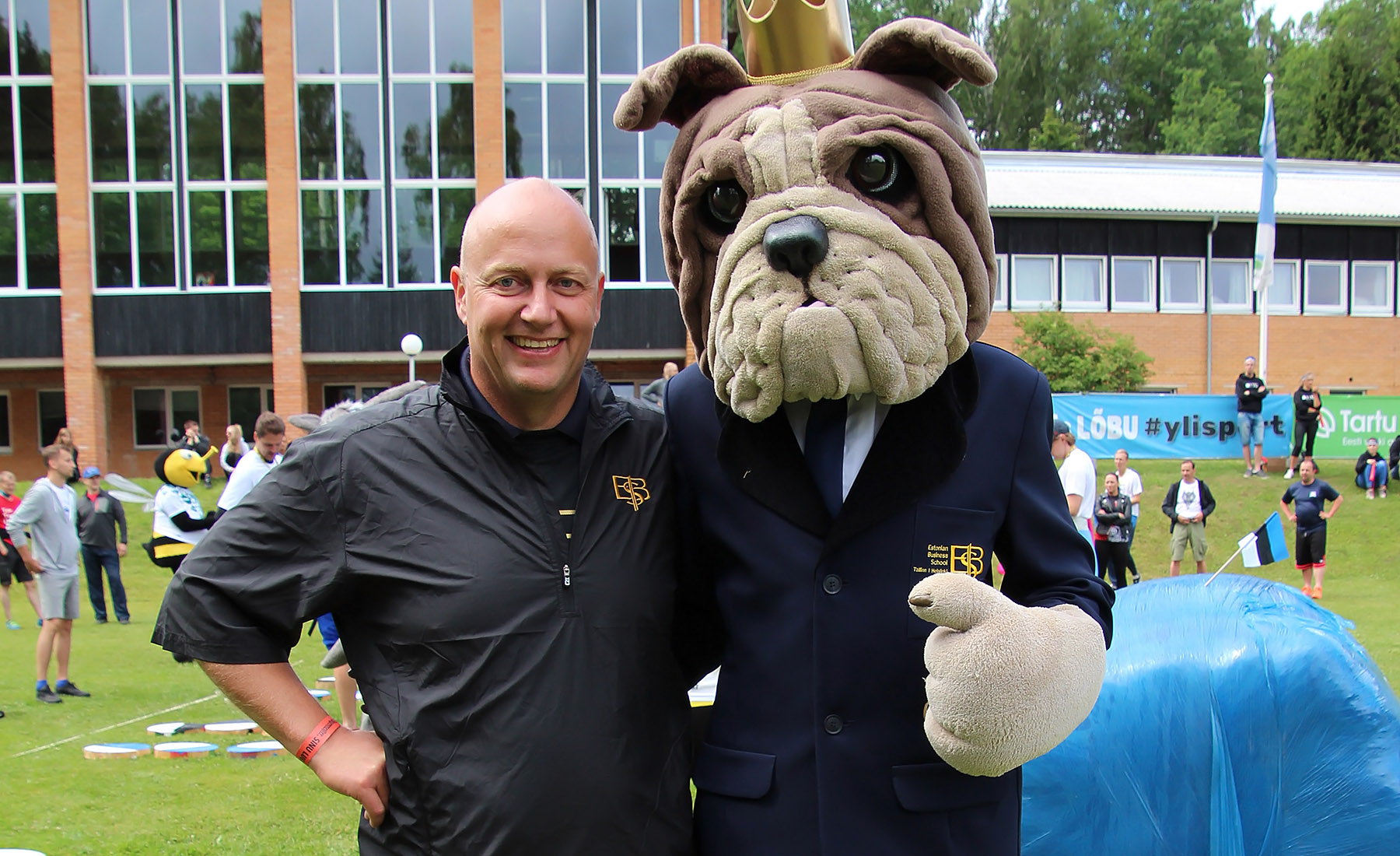 Even though EBS no longer organises summer days for students, staff members and lecturers, we still uphold the years-long tradition of participating in the pan-Estonian summer games of students. Every once in a while, we are victorious. In 2018, for example, EBS chancellor Mart Habakuk won the combined event organised for rectors and their deputies.

The balls and summer days have been an enjoyable joint event for EBS students, lecturers and staff members. But we have also had separate events for staff members and lecturers. Christmas parties and spring picnics were held at the beginning. However, as Christmas is amongst the busiest times of the year, the Christmas party tradition started to wane and the turn of the century, eventually disappearing entirely.

But the spring picnics have remained. In all honesty, it is neither a picnic nor held in the spring. Indeed, the picnic takes place in June, after the graduation ceremony, with dinner served on a nicely set table, rather than in open nature.

In 1999, HR specialist Reet Talvik and academic secretary Karmen Harju came up with the idea of making the spring picnic a bit more exciting. They fitted themselves with fabulous wigs and shiny, slim-fit pants borrowed from their daughters. “We arrived in the Tallinn Botanic Garden and entered just when Madis Habakuk was giving his speech. Even Madis started to stutter,” Talvik recalls the prank. After the mighty entry of Talvik and Harju, EBS staff members started dressing up in theme-based costumes for the event, instituting a new tradition.

In the spring picnic held in the Tallinn Botanic Garden in 1999, Reet Talvik and Karmen Harju started the tradition of a costume picnic, arriving at the venue, wearing spectacular wigs. 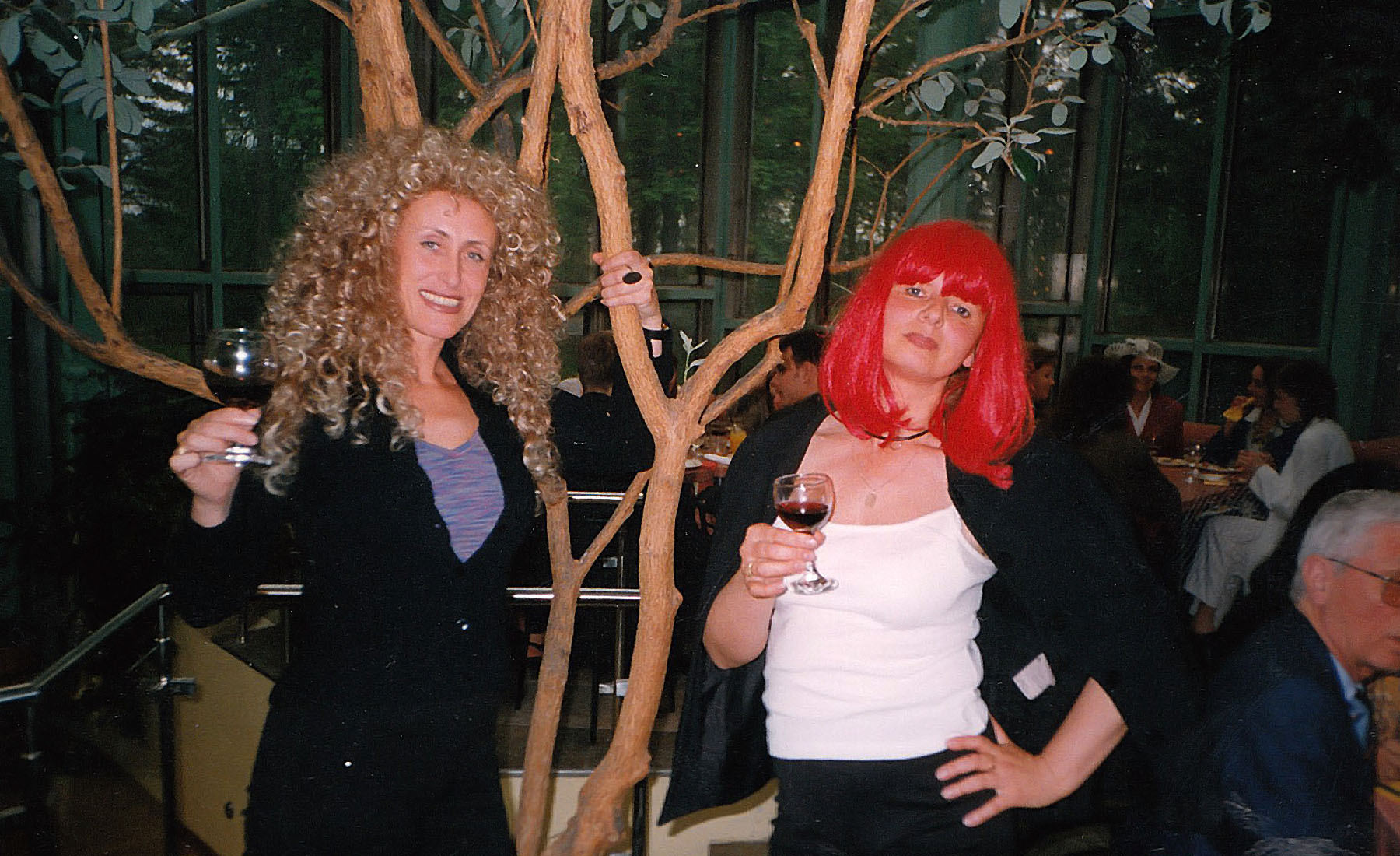 According to Sirli Kalep, all staff members take the theme seriously. In the end, those who look like fools are the ones who fail to come along, rather than those dressing up as penguins or doing a little dance number in a Russian folk dress.

Kalep, one of the organisers of the spring picnic also reveals a secret: the theme for the spring picnic 2015 was internationalisation. By raffle, each department was assigned a country to transform into. As it turns out, however, there was no actual raffle! “The organisers actually assigned a country to each department, making it appear as if the country had been raffled,” Kalep says.