In its early years the Estonian Business School was not a university. It was the strong leadership of Madis Habakuk which slowly guided the cooperative organising courses in the direction of becoming a university.

For example, in 1990 the one-year course was developed further and a curriculum lasting five semesters began to be offered, i.e. a vocational master’s programme. An integral part of that was the practical training on the other side of the pond.

In 1991, another bold step was taken, and the acceptance of daytime students began, based on an upper secondary school education into the International Business Administration BA programme (BBA). The planned time of study for daytime bachelor’s studies was four years, following the example of the curriculum in the United States. A significant emphasis was placed on teaching English, since they wanted to use English language text books, and an attempt was made to invite as many foreign instructors as possible to teach.

There were also those who had their doubts about the outlook of the bachelor’s programme. EBS’s foreign partners and Gundar King, a member of the Board of Directors, believed that starting with a BBA was too difficult and serious thought should be given to the decision. At the time, students studying at state universities were given a stipend, while EBS charged them tuition. And this while wealth was something that very few could brag about in Estonia at the time. Also playing a role in the doubts was the fact that the political situation in Estonia was quite tense, culminating with the restoration of independence on 20 August.

The doubts of the doubters remained doubts. In the summer of 1991, nearly 200 young people decided to apply to EBS, although there was only space for 10 people. The first two BBA groups began their studies in the fall of 1991, at the Sakala Centre.

The first class who completed their International Business Administration BA received their Diplomas in 1995. 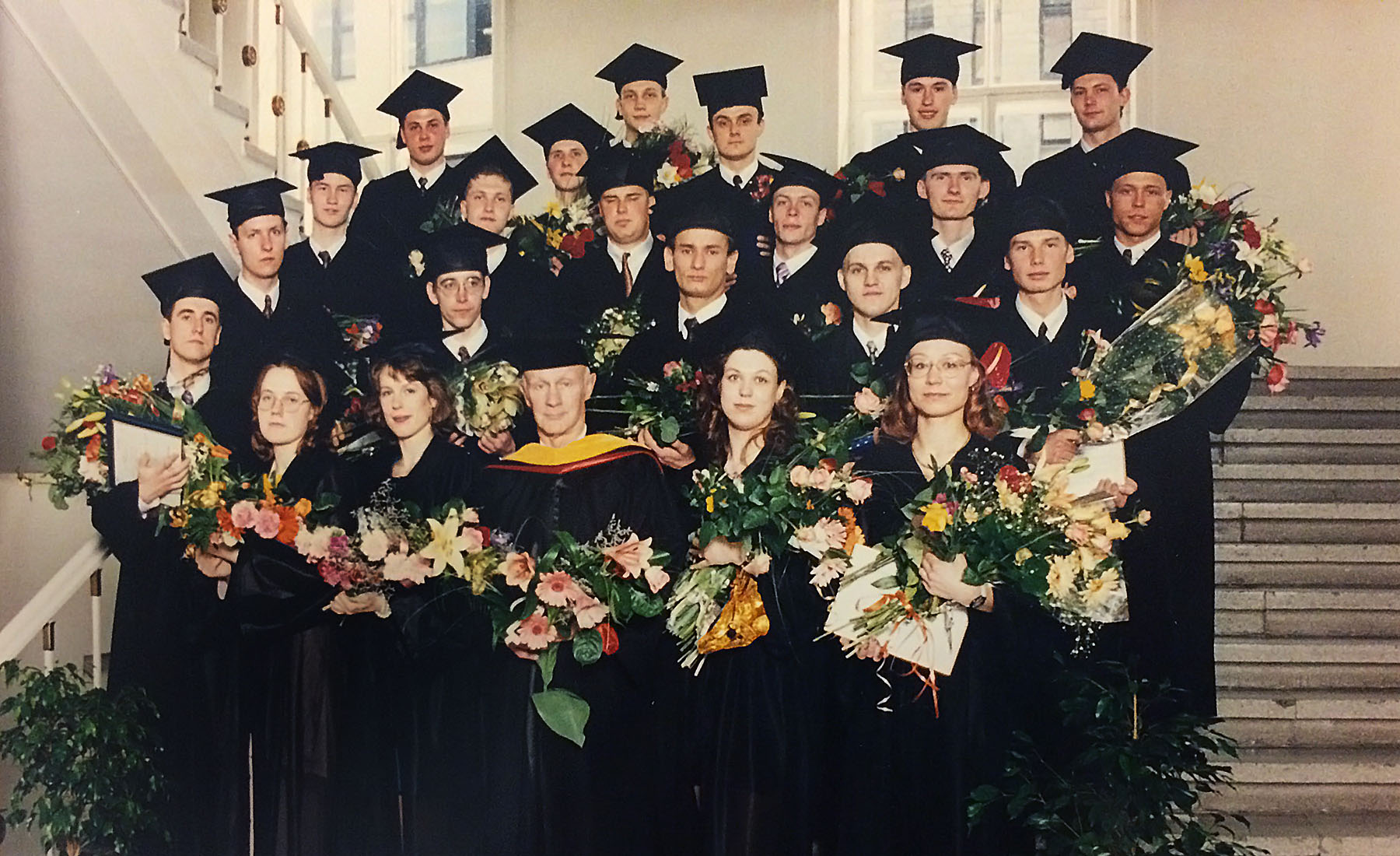 Madis Habakuk remembers the time as follows: “A school is transformed into a university by its daytime student programme. A life change. Those students who joined us on the first flight were very good, having already made it very far in life. They felt like private university students, very much their own people, very decisive.

I am reminded of a story, one that rubbed our secretaries the wrong way. EBS still had very few computers, there were no computer classes yet. Students needed to do a number of different things, which meant that they were continuously using the computers, meaning that EBS’s own workers were unable to access the computers. And the importance of students was recognised here from the beginning, as they paid us. The student is the customer – and the customer is always right. The right to also use a computer, which meant that it wasn’t easy to get a BBA student to give up a computer once they were seated behind it. In one instance, a student said to a secretary who was working behind the computer: “What is taking you so long, I’m in a hurry to get something done”.

EBS Vice President Avo Meerits (1993–1997) remembers that the daytime students of the first course were characterised by their excellent language skills. Everyone knew that the instruction was in English and they carefully learned the language. “Perhaps the reason was that we had a large number of western instructors who sensed that they were on a mission, who had come to Estonia to see what a post-communist country looks like. Lecturers taught primarily on the basis of a stipend, also frequently without pay, not with the goal of earning money”.

In connection with the creation of the BBA daytime department the number of students grew suddenly, and the tiny course provider began to slowly morph into an institution of higher education. A total of 50–60 students were accepted in the first year and the numbers began to grow each year.

Madis Habakuk has succinctly summed up the start of bachelor’s study with one sentence. “The master’s programme was an honour and helped to bind us to the world of business, but EBS would never have become a university if we had not started with the bachelor’s programme”.

“I consider the best investment that I made in my life to be my Master’s level degree from EBS.”