EBS moves out of its home

When the cooperative with the name of the Estonian Business School first began to gain momentum, the time arrived to move out of the Habakukk’s home – EBS soon moved to Tööstuse Street.

At the end of 1989, EBS moved once again: this time to the Sakala Centre on Rävala Avenue, where we remained for several years. It was home to the EBS office and instruction also took place there.

During the period 1993–1997, Avo Meerits, who was Vice President of EBS, recalls that EBS was like a family in the Sakala Centre – everyone knew everyone by name and also knew their mannerisms. The entire school’s governing body sat in a 40 m2 room, which was divided with partition walls. In the corner was a sofa, where one could drink coffee and at the other end of the room sat the president.

During the break between classes students also came to that room. Sometimes, Madis Habakuk stood up: “Please be a bit quieter, I have a serious visitor and we need to talk”. Contact with students was quite direct and there were no faculty-teacher barriers.

Professor Jaan Ennulo in his EBS office at Sakala Centre. 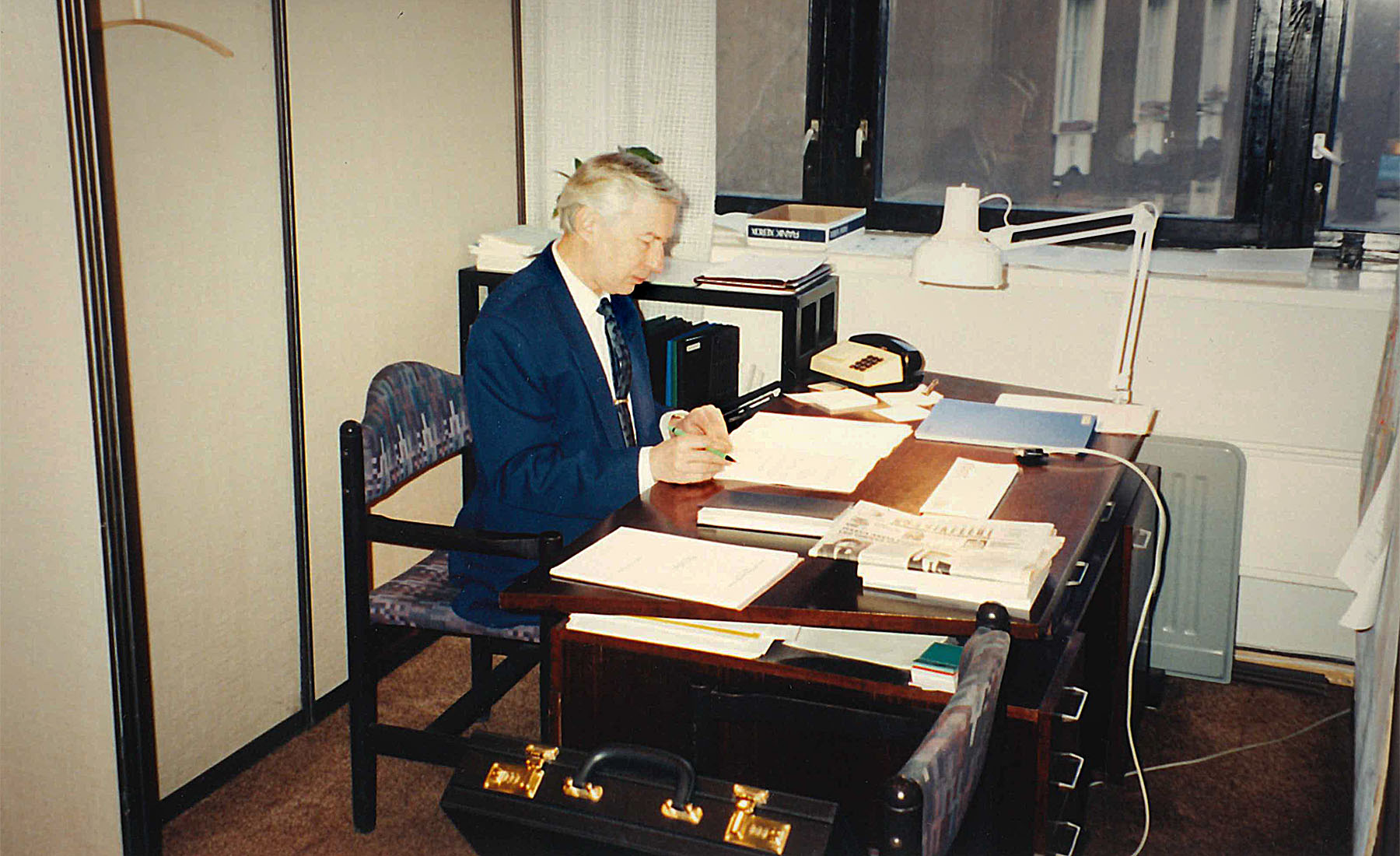 A barrier did arise from time to time between EBS employees and their work equipment. Director of Finance Tõnu Küttmaa remembers that it was impossible to work with computers during the cold of winter in Sakala, since there were continuous power outages. Computers could be used in the early morning or late at night. Students also wanted to use the computers of office workers to do their homework, which reduced the opportunities for workers to do so, for which they were paid a salary.

Of course, nobody went unpaid. Professor Jaan Ennulo, who was the Director of Social Sciences at EBS during the 1990s, vividly remembers payday. “Everyone visited the accountant-cashier on payday at Sakala Centre, who counted out your salary in cash. The accountant sat directly opposite to me, so that the entire line of people passed by my desk. At that time, salaries were not deposited in the bank”.

EBS only had three auditoriums at its disposal in Sakala Centre. Therefore, language instruction took place elsewhere: in 1992 on Lai Street, in the Old Town, and later at the Estonian Maritime Academy, on Endla Street, and in the second-floor rooms of the Tallinn Central Library. Aet Toots, Director of the Institute of Foreign Languages at EBS, remembers that the door to the Maritime Academy jammed all the time.

There was also no tape recorder at the Maritime Academy, which meant that it had to be brought along from the Sakala Centre with a trolley to Endla Street, and then returned afterwards. Travelling back and forth was a bit of a hardship for the students as well, since they had nearly 12 language lessons per week.

Avo Meerits remembers that there were all sorts of ideas on where to move from the Sakala Centre. “The idea was bandied about that we build our own building. We conducted an extensive search for a new location for the school. The most exciting place that we visited with Madis Habakuk was the Tondi barracks. We would have been able to make a university like one in England inside the red brick walls of that castle-like building. At the same time our financial opportunities were so limited that we could only dream about something like that”.

EBS had its housewarming in the Lauteri Street building at the end of 1995, but the school did not finally settle there until the next year. 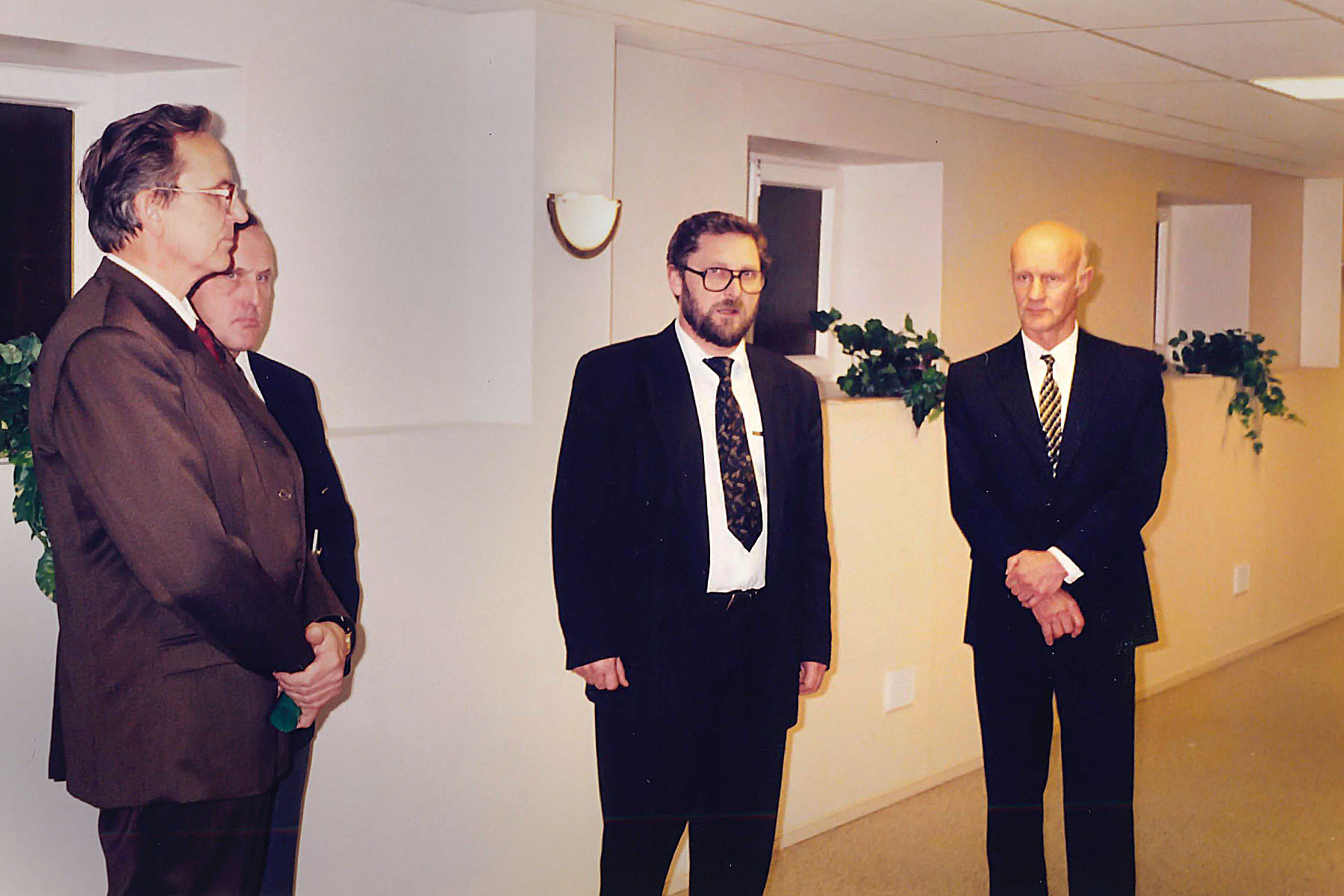 The long-awaited move took place in 1995: EBS moved into the Institute of Light Industry building, on Lauteri Street, where the Institute had room to spare. This saw the end of the need to hold classes in different parts of the city and the need for all EBS employees to fit into a 40 m2 room.

True, the condition of the Lauteri Street building was initially rather bleak, and therefore required major repairs. A large proportion of the money available was spent on completing construction of the attic, or fourth floor. The roof and the windows required replacing. Instruction and language rooms were renovated, with the result being that EBS had the most modern computer classroom in all of Estonia.

The old proverb states that a name won’t ruin a man, even so, at the beginning of the 1990s the idea of changing the name of Estonian Business School began to circulate within the school.

When the school was founded, it was believed that EBS is a concept that would never require translation into Estonian, since the instruction took place in English (or was ideally supposed to). Life showed that one hundred per cent instruction in English was not possible, due to the students and the instructors. So, the switch was made to Estonian.

Madis Habakuk recalls the words of Tiit Koldits, member of the Sakala Centre’s management: “How can you put a sign with “EBS” on the wall, it’s such a weird name. Give yourself an Estonian name”.