Alumni have played a decisive role in creating and maintaining EBS traditions.

The alumni movement became more active in the beginning of 1990s, when the number of EBS graduates amounted to several hundreds. Discussion over activities, which would be interesting and beneficial for both alumni and the university, started.

The organisation of alumni conferences, launched in 1999, is among the events worthy of being called a tradition. A total of nine successful alumni conferences were held, presenting topics and performers of interest not only to the EBS students, but the Estonian society in general.

The first alumni dinner party was held at the beginning of 2007, combining a nice atmosphere with exciting presentations. The tradition of alumni dinners has survived to the present day.

Peep Aaviksoo has participated in all of the EBS Alumni Golf events. 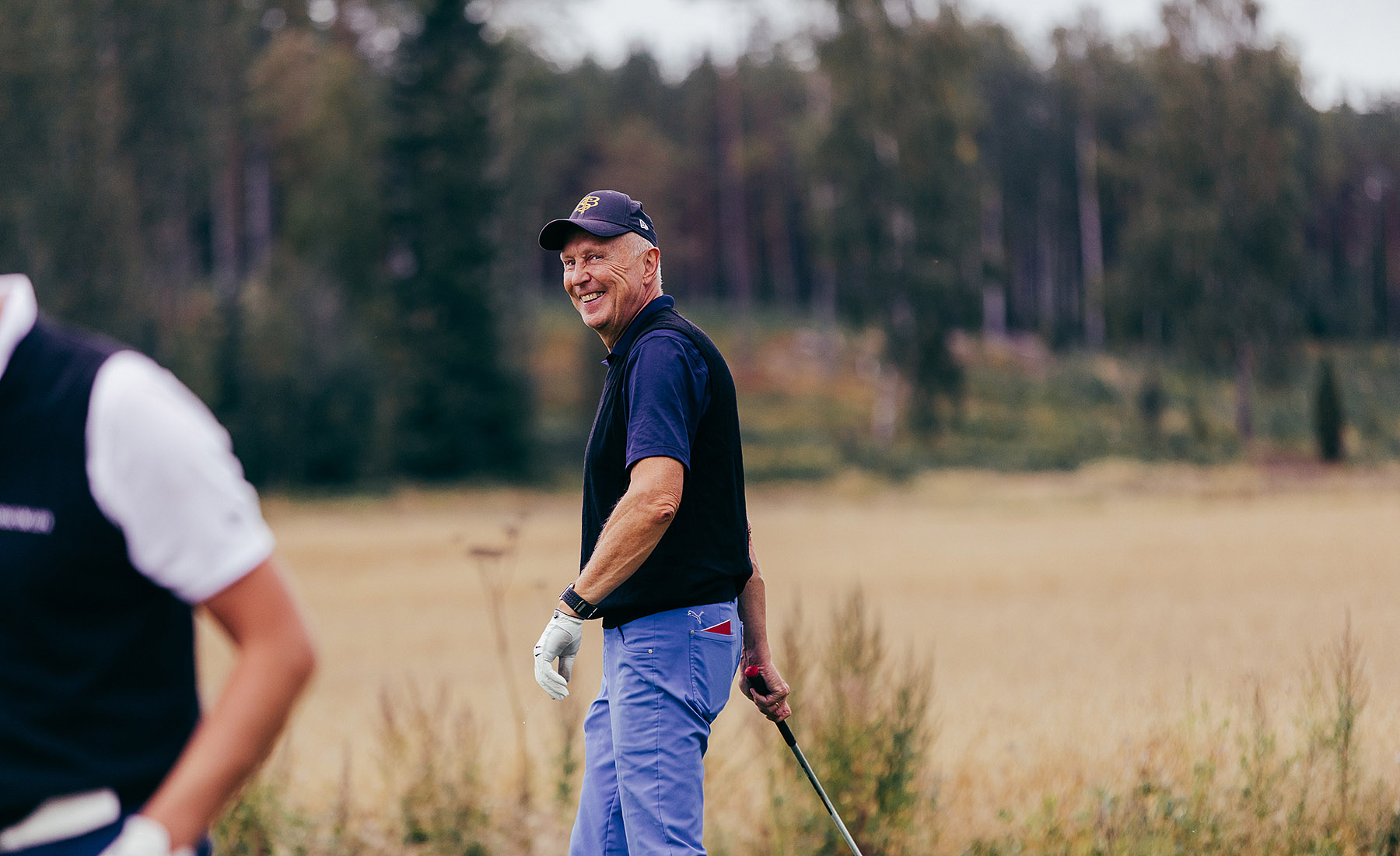 For years, our alumni have been passionate about golf. The EBS Alumni Golf event has been held on 14 occasions. In addition to the alumni, the Jõelähtme golf course also welcomes EBS students and lecturers. EBS graduate and current head of EBS Executive Education Peep Aaviksoo has participated in all Alumni Golf events and believes Alumni Golf to be a chamberlike event – good vibe instead of mass.

The golf tournament is held in three competition classes – A, B and C. Prizes are awarded to the top two players in each competition class, as well as the winner of the striking competition. The results of the best strikers and names of Class A winners are engraved on the 1889 trophy, donated by Madis Habakuk and purchased from the Bukowski auction. The trophy is kept on EBS premises and serves as a memento of the golf tournament. Those who fail to rise to the highest pedestal should not despair. It has become tradition for participants in EBS Alumni Golf to bring presents from their companies. All participants will receive a small memento of their own.

After Madis Habakuk passed away at the beginning of September 2016, EBS Alumni Golf events have been held on St Matthew’s Day (Estonian Madisepäev or Madis’ Day) on September 21.

Do you know what the very first tradition of EBS was?

Tip: it is the longest-running continual tradition lasting from 1991 to 2015.

Furthermore, the candidates must be well-known, with a positive reputation in economic circles and public life, and with a good standing in the Tax Board. A person may only receive the award once. Candidates are set up by members of the EBS Council as well as participants in and graduates of the EBS SMBA programme. 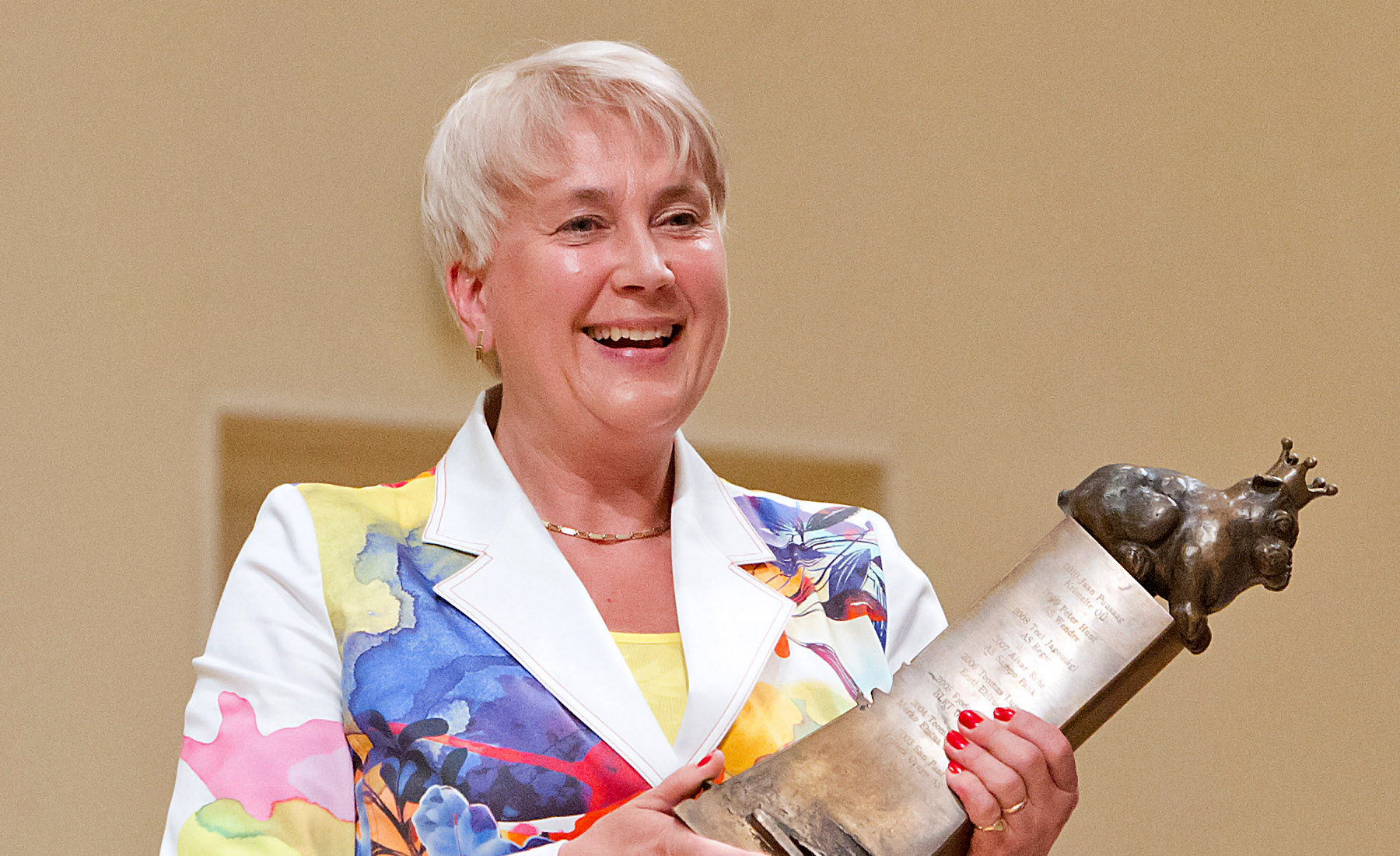 The honorary title was awarded to the Business Manager of the Year in June, on the graduation ceremony of the university. The award was accompanied by a massive sculpture, with a crown-wearing bronze bulldog on top of a pyramid. In 2011, Joakim Helenius, Chairman of the Supervisory Board of Trigo Capital Group, became the first foreigner to receive the award.

According to Helenius, a good business manager must be reliable, take initiative, maintain a deep understanding of the areas of responsibility, and be able to successfully cooperate with other people. “The latter provides an especially important advantage to being successful in Estonia. Estonians are often excellent specialists but they lack the skills to “sell” themselves and their ideas within an organisation and outside Estonian borders. Those, who succeed in developing good sales skills, among other characteristics required of a good business manager, are those most likely to reach the top.”

In 2012, Anne Samlik, CEO and member of the management board of Estravel became the first woman to receive the award. “A good business manager makes a daily effort to become an even better manager for the employees. The greatest challenge of present-day business managers is to be one step ahead of the competitors. In the tourism sector, similar to many other sectors, it is increasingly difficult to maintain the lead in very tight competition. The technological development has suddenly made the entire world our competitor. We must cope with it,” said Samlik, discussing the greatest challenges.

The last Business Manager of the Year title was awarded in 2015, with a total of 25 people receiving the honorary title over the years. The fine tradition ceased for pragmatic reasons: various awards are given to businesspeople by many organisations, starting from international business advisory firms and ending with media publications and representative organisations of entrepreneurs. A multitude of similar honorary titles from different organisations is quite confusing. Even though it is nice to give and receive awards, EBS decided to leave the game.