A quick flirt with the Hindu

Even though a first try often fails, this was not the case in the cooperation between EBS and China. The Chinese students’ conscientiousness in their studies in EBS encouraged the business university to experiment with other Asian countries.

In the autumn of 2002, Endel Laanvee, EBS Prorector of International Relations, received a letter from Karnal, Northern India. The letter made a proposal to start bringing Indian students to Estonia. Negotiations followed in the potential areas of cooperation.

In March 2003, Madis Habakuk and Jan Andresoo, the managing director of EBS flew to Karnal. During the eight days of their stay, they interviewed approximately 150 student candidates and established EBS’s subsidiary EBS Education India. The purpose of the subsidiary was to pave the way for entry into the Indian university market with the aim of opening an EBS branch in the country.

The first students from India arrived to EBS shortly before the 2003 autumn semester. Together with the Indians, the picture also holds the EBS Vice Rector Endel Laanvee and Programme Manager Silja Mägi. 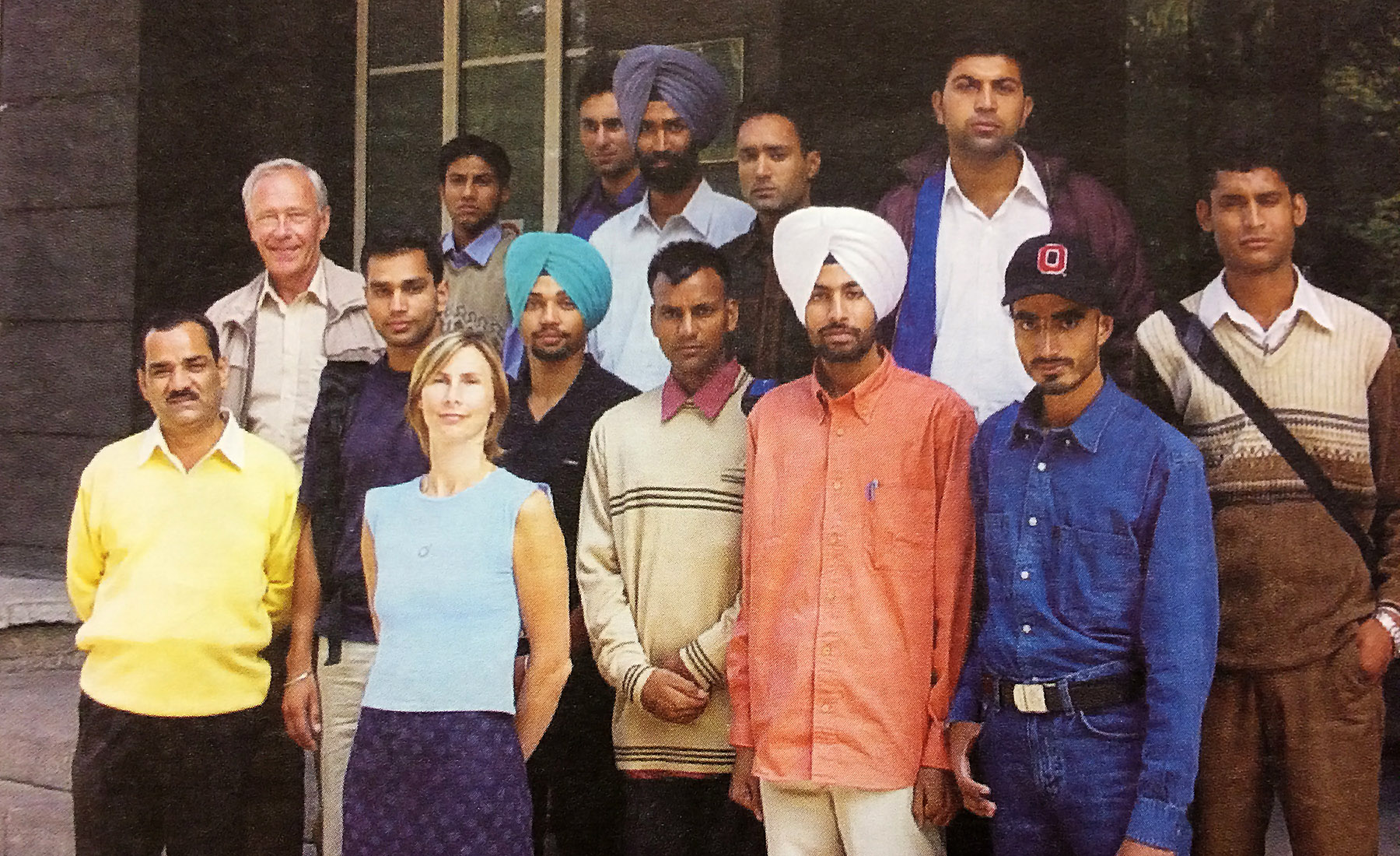 The first stage of conquering the Indian market involved bringing Indian students to Estonia. The first students arrived in Tallinn in August 2003: 13 master’s students and 19 bachelor’s students. During the introductory month, the young men admitted to EBS (Indian traditions do not endorse women’s education) were given the opportunity to learn basic Estonian and get background information on the country and its people. English classes and computer classes started, as well. The main programme commenced in September.

By that time, however, it was clear that the Hindu did not have the conscientiousness and diligence of the Chinese. Riina Koris, who taught English to future EBS students in India in the early summer of 2003, admitted that the greatest fault of Indian students lies in unfinished homework. “Should a teacher wish to check the homework assigned on the previous day, it is more than likely that 80% of the Indians will give the teacher an innocent look, announcing that they haven’t done it. Some of them had never heard of homework, others didn’t have time, and others still considered it completely unnecessary,” Riina Koris described in the EBS newsletter.

Furthermore, the Hindu failed to lay any importance on coming to class on time. Riina Koris: “They are gently willing to explain that life won’t come to an end, if you arrive to class 15–20 minutes late. Coming late is not an exception. It is a rule. And not only for students but for almost all Indians.

All else is more exciting than studying

In November 2003, Endel Laanvee gave an interview to the EBS Alumni Newsletter: “While the current students originate from the Norther part of India, we have now set our sights on the middle part, with stronger universities and a higher level of the alumni. I came from India a few weeks ago, establishing a relationship with India’s greatest university, Osmania University Campus Hyderbad. The longer-term plan is to establish an EBS campus in India. We could then carry out the first part of the academic work (BBA programme and first year of MBA) on site, offering stronger students the option of continuing their studies in EBS. We intend to realise the idea by using both local staff and staff of our own.”

However, this was never meant to happen. The door to India had been opened, but the cultural differences between Estonians and Hindu rendered the educational cooperation unreasonably strenuous. The wiser head gives in – and this is exactly what EBS did, putting an end to its efforts to conquer the Indian education market.

But the distant markets were still alluring. In 2005, EBS started making preparations for opening a branch in Dubai, United Arab Emirates, seeing a huge potential in the local business and educational market. Nonetheless, the plans of gaining grounds in Dubai proved too complicated and fell flat.

Despite setbacks, internationalisation maintained its significance in EBS. Endel Laanvee stated that EBS must be as international as possible. “It is the keyword for our sustainability. Otherwise, EBS could vanish, considering the number of institutions of higher education in Estonia, against the ever-decreasing number of secondary school graduates. There is not enough (Estonian) students for everyone, but the global population is growing. Our advantage lies in two international, i.e. English-language study programmes – international BBA and international MBA –, but this advantage is not long-term. The University of Tartu and the Tallinn University of Technology are making headway in recruiting foreign students,” Laanvee said in the EBS alumni newsletter in 2003.