A friendly and welcoming employer

EBS started out in 1988 with five staff members.

Alongside Madis Habakuk, academic consultants Urve Margus and Piia Sandla, secretary Nelly Kolk and English teacher Elin Saks were employed full-time in EBS. Fast forward 30 years and the university has 99 staff members, with more than a third having a minimum of 15 years of experience. Together with EBS Gymnasium, Estonian Business School has 112 full-time employees as at the late autumn of 2018. An equivalent number of lecturers teach classes in EBS in their free time.

Now back to the beginning. One of the first employees, academic consultant Piia Sandla was invited by Madis Habakuk as a colleague from the institute of economic managers. “We had a good cooperation with Madis Habakuk. As soon as he established EBS, he invited me to join. So I did. Even though the times were confusing and the risk was considerable,” Sandla admits. The institute was a reputable organisation, but EBS provided no guarantees that students would actually join. The tuition fee was very high. “Madis Habakuk won me over,” says Piia Sandla, describing the background of the decision taken 30 years ago.

The founder Madis Habakuk and Educational Consultant Piia Sandla worked at EBS since day one, the Financial Director Tõnu Küttmaa joined in September 1989. 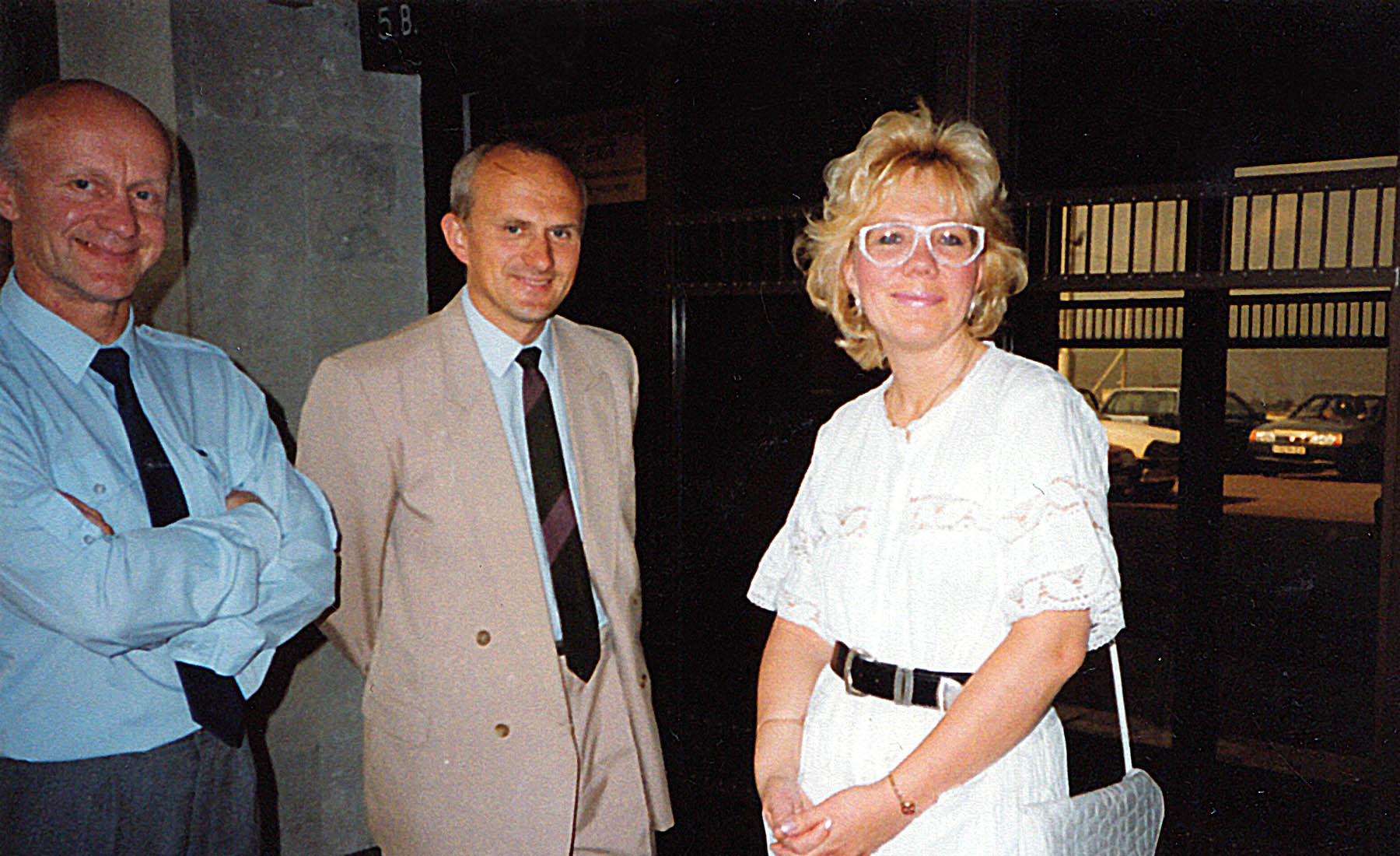 The work of the academic consultant in Estonia’s first private educational institution entailed a range of various duties, from the preparation of the timetable to organisational issues. For example, Piia Sandla was charged with the task of organising transport to Suurupi, where the lectures of the first-year students, i.e. IB1, were held in 1989. Her duties included organising US and Canadian visas and flight tickets for the students, so that they could cross the ocean for practical training. “Flight tickets and visas were the hardest – I am still baffled how I accomplished that. It was extremely hard to get any,” says Piia Sandla.

Obviously, administrative errands were time-consuming, with the staff of the new educational institution working from early morning to late at night. “Without any exaggeration, I sometimes had 24-hour working days. When something needed to be done quickly, it had to be done straight away,” says Piia Sandla.

Piia characterises EBS at the time as an exciting, daring and cool employer, and Madis Habakuk as a charismatic leader. “Madis let us do our thing and did not check on us, nor bother us with constant questions of whether one thing or another had been completed. This approach fully justified itself. Nothing was ever left undone,” says Sandla, stating that Madis Habakuk trusted his people. And rightly so – he himself had chosen these people.

A great trust was also evident in Tõnu Küttmaa’s first day as the new EBS head of financial and administrative department in September 1989. “I came to work at a time, when the IB1 group returned from the practical training in US and Canada, and we had to drive to Suurupi, so that IB1 could share its experiences with IB2. I went to pick up Madis Habakuk at his home in the morning, but Madis came to the door, excused himself with a high fever, and left me on my own. Upon signing the employment contract, I had only seen the secretary and academic consultant, no-one else! Fortunately, with the help of the academic consultant, we organised the group work quite successfully for the day,” says Küttmaa.

In all honesty, the organisation of academic work was not included in the duties of the new vice president of finance. But in a small school, everyone had to do everything, despite their title. This line of thinking – when something needs to be done, no reference will be made to time and job position – has been maintained by EBS for 30 years.

Reet Talvik, who was invited by Madis Habakuk in 1992 to join EBS as his secretary and currently serves as HR specialist, remembers how she sewed school curtains with her colleagues. “EBS was housed in the Sakala Centre in Rävala puiestee, but space was scarce. We had to accommodate classes in the naval school in Endla Street. But the premises were desolate and we decided to sew curtains to make it more cosy,” Reet Talvik recalls.

Tõnu Küttmaa remembers EBS as a quick and efficient school with no red tape. “As I was holding negotiations with Madis Habakuk in his living room, he typed the decree for my employment right there in the adjacent room. I was impressed by the speed and efficiency. Back in the days of my previous employer, Estonian Collective Farm Construction, these things took days,” says Tõnu Küttmaa. Even now that the organisation has grown considerably, decision-making remains operative and changes are introduced quickly, whether in the curriculum or organisational structure.

EBS Chancellor Mart Habakuk believes that EBS has always dared to try out new things. “We yearn to improve, and are not afraid to take calculated risks. The people of EBS are collaborative and inventive, and our environment nurtures ingenious thought,” says Mart Habakuk, adding that in his opinion EBS is a phenomenal organisation.

“When I wasn’t working here, I couldn’t figure out how it was possible to compete in a market where alternative services are free of charge (reference to free higher education – editor). I now understand. We have a phenomenal business model and we have succeeded in creating a self-sufficient corporate service in a market where services are provided for free. Yet we continue to be successful, despite all odds. It also speaks volumes about the philosophy of economic education – even when things seem impossible at first glance, they become possible if you are good at it,” says Habakuk.

In quite a few cases, EBS graduates later come to work for EBS, as a lecturer or in any other position. Professor Kaire Põder, head of business ethics centre Mari Kooskora, head of bachelor’s studies Anto Liivat and academic prorector Maarja Murumägi are all graduates of EBS, to name a few.

EBS also has staff members who have been involved with the Lauteri Street school half their lives. Head of foreign and corporate relations department Sirli Kalep is one of them. Kalep has graduated from EBS Upper Secondary School, has acquired the EBS bachelor’s and master’s degree and has been professionally involved with the school for nearly seven years.

Kalep, who started her bachelor’s studies in business administration in 2003, was recruited by EBS before graduation. “I had been previously involved with student exchange and was invited to become the Erasmus coordinator. I considered it a cool opportunity – I hadn’t even acquired my bachelor’s diploma, but was already offered a job position!” After 18 months of service as the Erasmus coordinator, Kalep moved on to implement her knowledge in a private business. Sirli Kalep returned to EBS in 2013.

Working and studying in the same building: Along with her Master’s diploma, Sirli Kalep also got to admire a picture of Ryan Gosling that her colleagues sneaked between her diploma covers. 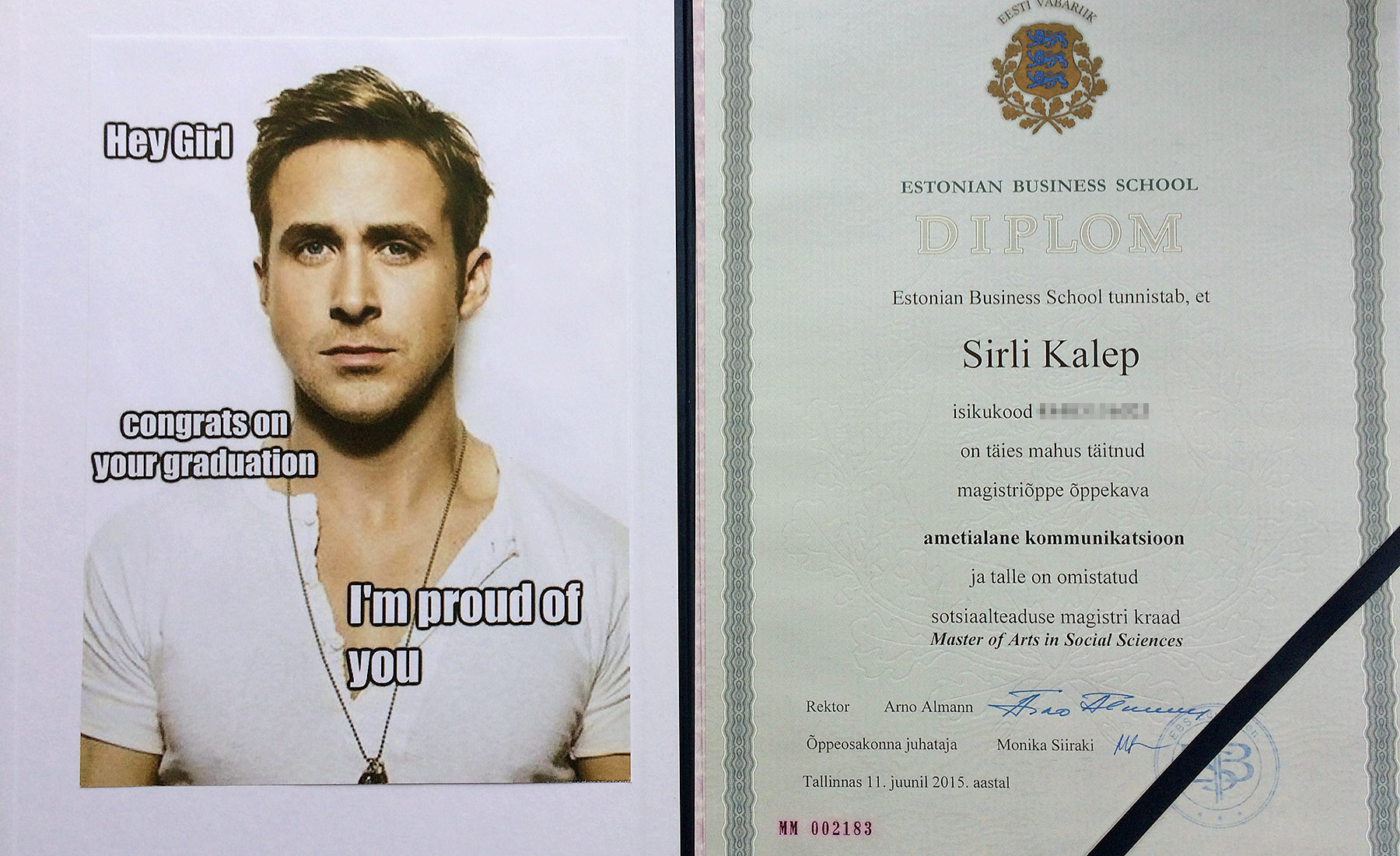 According to Kalep, EBS as an employer is reliable – as soon as you have a new idea, you can start working on it. EBS is also a close family, celebrating birthdays and helping to find friends. “Both times I graduated from the university, my graduation ceremony was attended, alongside my family members, by my colleagues. In addition to the diploma, funny pictures and messages had been placed between the diploma covers,” Kalep recalls.

HR specialist Reet Talvik and academic secretary Karmen Harju, who have served with EBS for more than two decades, concur: the people of EBS are friendly, helpful and team-spirited. Despite the fact that the small private school has grown into a large university over the years, this has had no impact on sense of unity. “Every once in a while, a student slips a chocolate on the corner of the table. Years ago, a young man brought a smoked turkey for Christmas,” says Harju, who has served as the academic secretary of EBS since 1994.

Students have also given nicknames to staff members: Karmen Harju is known as the Eagle Eye – no doubt because she often watches over exam-takers, catching cheating students, even when they eat their crib sheets (indeed, a true tale!).

We have to admit that nowadays, where EBS has more than 1,500 students, the relationships are not as personal as in the beginning of 1990s. Reet Talvik recalls that, back then, everyone (a dozen staff members and a hundred students) acted as a single family. “Students came to us with all their ups and downs.

When the school was still housed in Sakala Centre, students even used our computers to conduct their business during the breaks. But this interfered with our work and Madis kindly asked them to stop,” Reet Talvik recalls. Talvik characterises Madis Habakuk as a man who truly cared about his people, never raised his voice, was a good listener and speaker.

Karmen Harju recalls how staff members once decided to make a calendar as a Christmas gift to Madis. Not an ordinary calendar, but one with a photo of Madis’ dog on the cover. “Madis’ wife Marje told us that Madis had been very-very happy with the new family member, when they first got their dog. Our IT team took a photograph of Doora in Madis’ backyard. As soon as Madis opened the present, he shouted out, surprised and cheerful: “My Doora!” It really made him very happy. He later even talked about his dog calendar in his director’s club,” Karmen Harju recalls.

EBS started out in Sakala Centre at the beginning of 1990s. On a nice afternoon, the lobby door opened and in came President Lennar Meri – alone, without any escort. 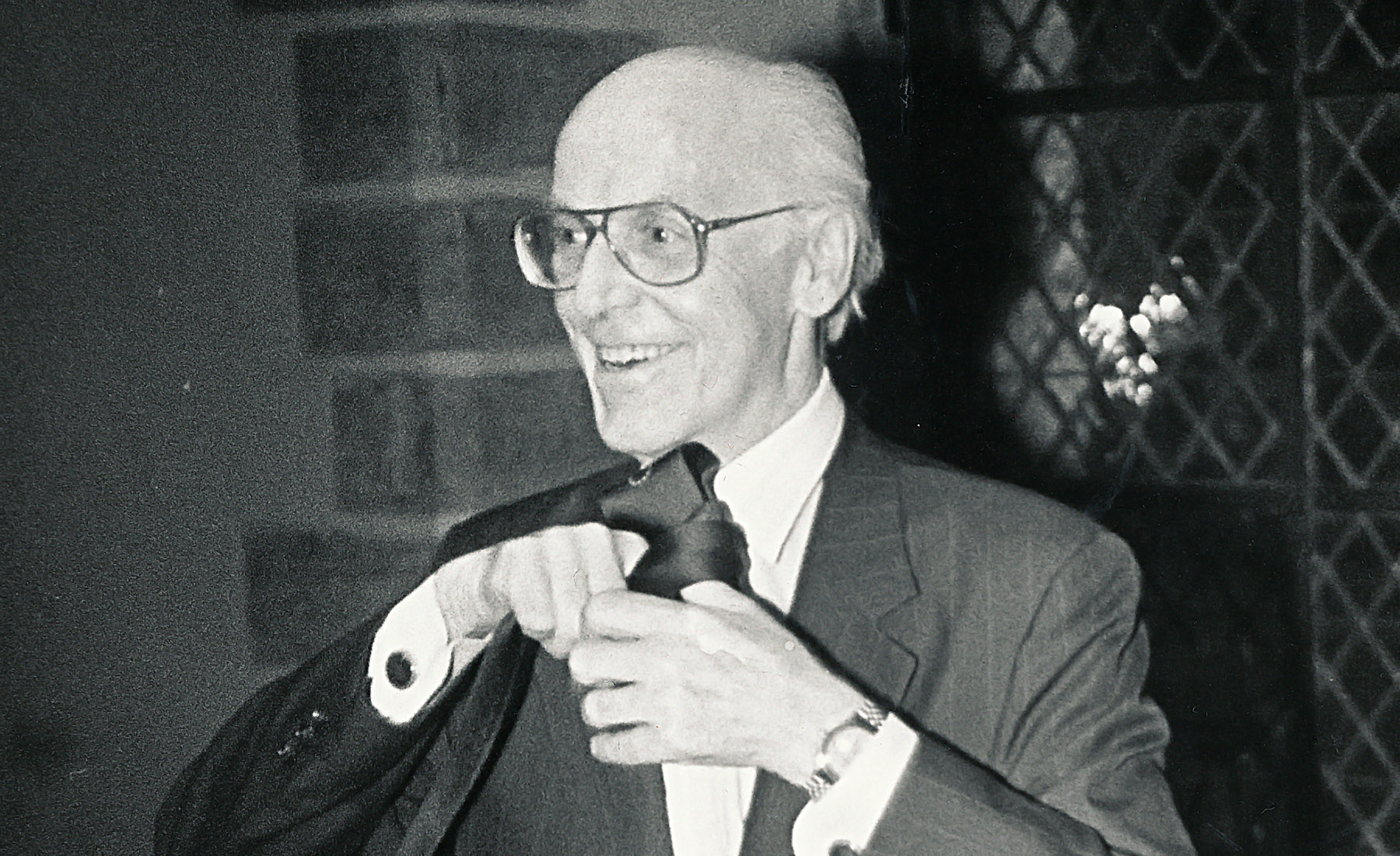 “He had the habit of escaping his bodyguards. Meri was in a good mood, asking what we were doing. We were quite stunned, but we gave him an overview of our activities. We later regretted forgetting to offer him a cup of coffee,” Reet Talvik recalls the unexpected meeting with the President of the Republic.